Tana Toraja is famous for its cultural richness. Very famous for their traditional house building. The traditional house called Tongkonan. Tana Toraja has a specific and unique funeral ceremony which is called Rambu solo. Speaking of Rambu solo ceremony, Toraja ethnic communities have unique treatment in the case of a funeral. In this area, the bodies were not buried but placed in Tongkonan for some time. This time period can be more than ten years until the family have enough money to do the proper ceremonies for the dead. After the ceremony, the bodies were taken to his final resting inside caves or wall mount. In addition, Tana Toraja also has the most visited tourist the place. Most of them are caves and rock walls, become the place, for the corpse as a final resting place. 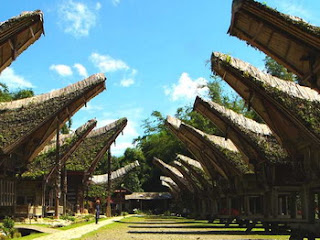 Pallawa is a traditional house of Tana Toraja, which is built with bamboo structure then the arch-shaped roof like boats, traditional house has 2 functions as a kitchen and bedroom. Then the front of the house there is a buffalo horn arrangement that has been arranged neatly. Pallawa has its own charm, a lot of art and culture is stored in Tana Toraja tribal house, do not be surprised if tourists make Pallawa as one of their destination to the North Sulawesi. Located at 12 Km to the north of Rantepao. 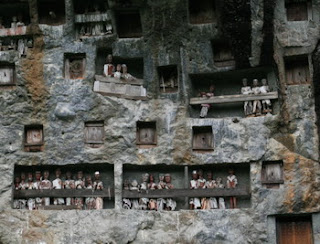 Then the second popular tourist destination in Tana Toraja is Londa, which is a typical funeral Tana Toraja residents, where the tombs are placed in the cliff walls of the cave. The tomb neatly arranged according to lineage. On the other side of the hill are left open, overlooking the green expanse of scenery. Londa is located in the village of Sendan Uai, Sanggalai district, about 5 Km to the south of Rantepao, Tana Toraja. 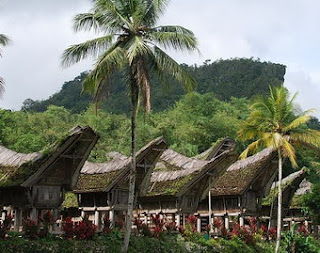 Ke'te Kesu mean center of activity, where the presence of the township, the place of carving crafts, and cemeteries. Activity center is a row of traditional house called Tongkonan, which is the object of this charming village. In addition, there are rice granary and megaliths buildings in the vicinity. About 100 yards behind this village there is a cliff burial sites. This village is also known as carving skills possessed by its inhabitants as well as a great place to shop for souvenirs. Located about 4 km from southeast Rantepao. 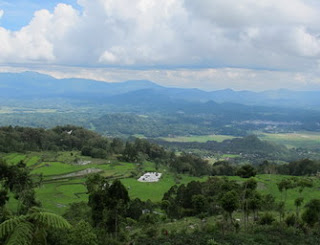 In this area you can find about 56 stone in a loop with 4 trees in the middle. Most of the stones have a height of about 2-3 meters. From this place you can see the beauty of Rantepao and surrounding valleys. Located in the area Sesean, with an altitude of 1300 meters above sea level. When morning in Batutumonga, fog and a set of white clouds wrapping the sky Tana Toraja. You'll feel like being standing, in the land of clouds. Batutumonga is a fairly quiet area and quiet activities. There's not much you can do other than enjoy the natural beauty and tranquility. It is suitable for those who want to eliminate fatigue.

Lemo is a tomb made ​​in the rocks hill. This hill is named Lemo because its shape resembles a citrus fruit (lime). On the hill, there are about 75 graves and each hole is a family tomb, with a size of 3 x 5 M. To make this hole can take 6 months to 1 year at a cost of approximately Rp. 30 million. This place is often referred to as the home of the spirits. In this cemetery, you can see the bodies stored in the open air, amid the steep rocks. This cemetery is a blend of death, art and ritual. At certain times the corpses clothing will be replaced with the ritual. Lemo grave stone is located in the north Makale, Tana Toraja.

6. Rafting on the River Sa'dan 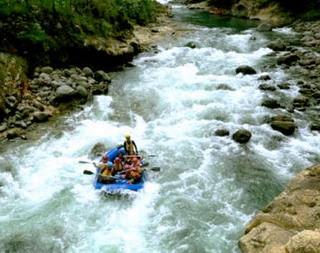 Sa'dan river has a length of about 182 km and an average width of 80 meters and has a tributary, as many as 294. Along the river there are some rapids with different levels of difficulty, in addition, the topography of the area is also very appealing with natural beauty and cool air along the way. 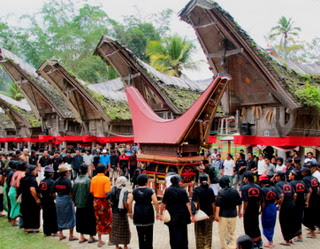 Rambu solo is Tana Toraja's traditional funeral ceremony aims to honor and deliver the spirits of people who died towards the realm of the spirit, which is returned to the immortality with their ancestors in a resting place. The ceremony is often also called the completion ceremony of death, because the person who died had considered completely dead after all this ceremonial procession fulfilled. The culmination of ceremony held in a specialized field. Moreover, in this ceremony there are many cultural attractions on display, including buffalo race before slaughter for sacrifice. There are also performances some Toraja music and dance. This traditional ceremony is usually held in Kampung Bonoran, Ke'te Kesu Village.
Tweet
← Newer Post Older Post → Home
Powered by Blogger.