Croatia, Europe, Zagreb
There are many tourist attractions in Zagreb to explore. As the capital of Croatia, Zagreb is a beautiful city rich in historical heritage. Parks, lakes, and ancient buildings became the pride of the city. Visit to this city will remind you of other cities in Central Europe such as Vienna, Budapest, and Prague. The city boasts a charming medieval 'old city' with architecture and cobbled streets.

Zagreb is indeed an art haven and a great place for those who would like explore the county’s rich history. Museums can be found around Zagreb and can be visited for a fee. These museums are where the city’s best-kept art and historical pieces are kept for the tourists, local and foreign. Zagreb is a city with a predominance of green landscapes, there are some parks that can be used as a picnic and relax in the afternoon. Jarun lake located in the south of the city became a favorite recreation spot locals. In addition, there is also a lake Bundek which hosts a variety of summer performances, including arts festivals, music, fireworks, and horticulture. 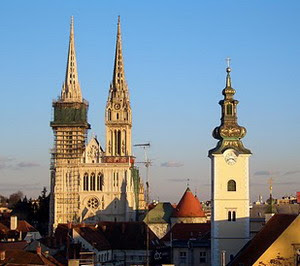 Zagreb Cathedral is a Roman Catholic institution and the tallest building in Croatia. The cathedral spires can be seen from all across the city as they climb to heights of 345 feet. Construction on Zagreb’s monumental cathedral began in the 11th century, with many additions and restorations since. The interior is as impressive as the exterior, with many fine adornments to admire. 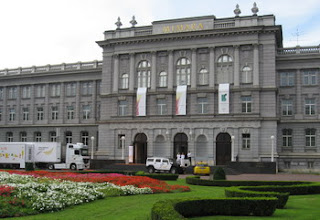 Mimara museum is the crown jewel attraction in Zagreb. The Mimara Museum is an art museum in the city of Zagreb, Croatia. It is situated at the Roosevelt Square, housing the collection by Wiltrud and Ante Topić Mimara. Mimara Museum is housed in a stunning neo-Renaissance building with a wide range of artifacts showcased on three floors. From ancient Egyptian glassware to fabulous Persian carpets, an enamelled crucifix from the 13th century to Renaissance alterpieces and numerous Far Eastern artifacts; The collection is unique and extroardinary at the same time. Now, the museum showcases nearly 4000 artifacts from all parts of the world. 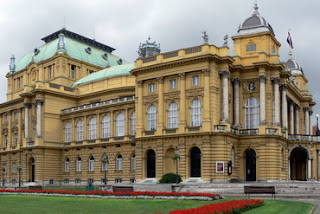 The Croatian National Theatre, commonly called as HNK Zagreb, is a theatre, opera and ballet house located in Zagreb, owned and operated by the Ministry of Culture. Croatian National Theatre is a stunning neo-baroque building. Many of Croatia's finest artist have worked at the Theatre. Alomst every night of the week there is a performance taking place. Tickets can be purchased online or at the ticket office in the actual building.

It is one of popular tourist attractions in Zagreb. This square is named after the church in its centre whose varnished tiled roof is a symbol of the capital. The chrurch it self is Romanesque and late Gothic St. Mark’s Church dates back to at least the 13th century. The square is surround by numerous buliings which are the offices of the Croatian cabinet members and the Croatian sabor. 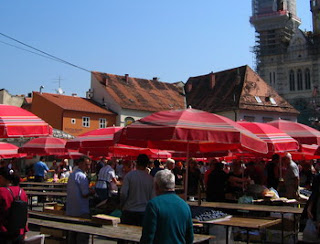 Dolac Market is the largest outdoor maket in Croatia. Dolac market consists of hundreds of vendors who come from various parts of Croatia to sell their local produce, poultry, dairy, meats and seafood. Under hundreds of red umbrellas you will find authentic Croatian products such as dried figs from Zadar, sweet mandarins from Metkovic, rich cheeses from Pag, olive oil from Hvar, green vegetables from Zagorje, seafood from Dalmatia and so much more. Fresh cut flowers and homemade lace are also available as well. 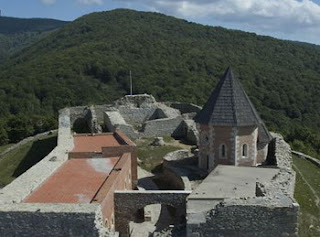 As a city located in the back of Mount Medvednica, Zagreb has a special place to complete your day. Medvedgrad, a fortress located at an altitude of 1,000 meters above sea level. Formerly, the fort was built to commemorate the Croatian soldiers who died on the battlefield. There are several historical festivals during the year, including knights tournaments. The gree jewel of a mountain Medvednica is over 1000m high covers a large area with many excellent hiking and biking routes. Since Zagreb is at roughly 120 m, it is quite a climb. There are many small restaurants, mountain grills and cafes at the top of the mountain, open until early evening. In the early and late summer it can be crowded in places, especially on weekends. 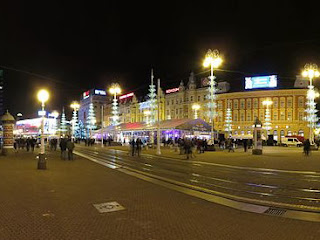 Ban Jelacic Square is located in the center of the Zagreb Downtown pedestrian zone. The square has existed since the 17th century. Its first name was Harmica. It features buildings belonging to different architectural styles ranging from classicism, secession and modernism. The central square of Zagreb has it all, in typical European fashion. A vibrant aura, many locals, great sights and best of all, no cars. Take your time here to soak up the atmosphere and get a feel for local life. 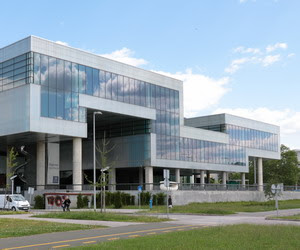 Museum of Contemporary Art is the biggest and most modern museum in the country. The building has a total area of 14,600 m2, out of which 3,500 m2 is reserved for the permanent display and around 1,500 m2 is designated for occasional exhibitions. The building also houses a library, a multimedia hall, a bookstore, cafe and a restaurant. The museum houses a total of 12,000 objects (of which around 600 are on permanent display)and numerous works by contemporary Croatian artists. 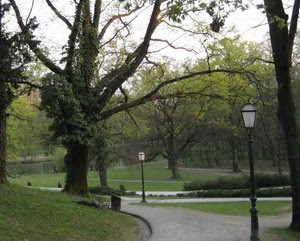 Mirogoj is the central cemetery of Zagreb. It was opened in 1876 north of the city center. The mortuary, the impressive and picturesque arcades with the church of Christ the King (architect H. Bollé, 1883-1914) make it one of the most impressive cemeteries in the world. Here stand the tombs of notable personalities (including that of basketball hero Drazen Petrovic) who are relevant to Croatian history.

Best time to visit Zagreb is June and July, the temperatures are warmer and days longer, making this an ideal time to visit.