In here you can see Icebergs and glaciers (especially the Ilulissat Icefjord, Animal life - Whales, seals, walruses, musk oxen, reindeer/caribou and polar bears. Also the Midnight sun, in the northern 2/3 of Greenland, the sun stays above the horizon for days or even several weeks in the summer. In the remainder, the weeks around the summer solstice (June 21, a national holiday) see the sun dip below the horizon for only a short while each night, with the sky never getting truly dark. (Of course the reverse is true in the winter.) 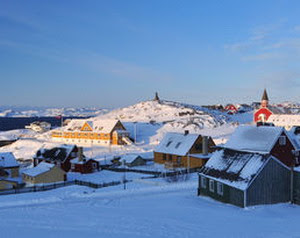 Nuuk is the capital of Greenland. It is situated at the mouth of the Nuup Kangerlua inlet on the west coast of Greenland, about 150 miles (240 km) south of the Arctic Circle. The city was founded in 1728 by the Norwegian missionary Hans Egede when Greenland was a Norwegian colony under the Dano-Norwegian Crown. Today Nuuk as the rest of Greenland is populated by Inuit and Danes. 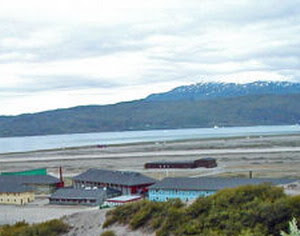 Narsaruaq is a small community with approximately 200 people mainly employed at the airport or the associated hotel. It is an independent facility with its own power station, harbor and workshops. Narsarsuaq is situated at the deepest end of the Erik fjord, which is located south of the island. Most people fly into Narsarsuaq when travelling to Greenland. 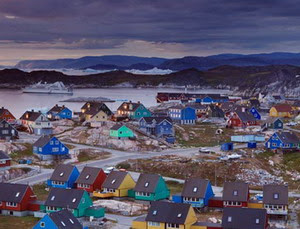 Ilulissat is the third biggest settlement in Greenland and situate about 200 kilometers north of the Arctic Circle. Illulisat also means "The Icebergs” and is Greenland's most popular tourist places. At its eastern end is the Jakobshavn Isbræ glacier which is the most productive glacier in the northern hemisphere. 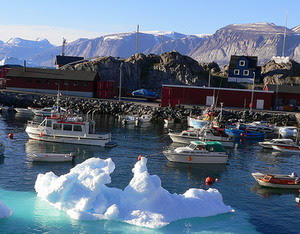 Uummannaq is a city in Western Greenland. The city can be experienced on foot. The surrounding region can in the summer be visited by boat, and in winter by dogsled or snowmobile. Dog sleds are used during the winter months to travel around the city, to fishing sites, and to the nearby settlements. Travelers can experience the midnight sun in Uummannaq from May 17th to July 28th. 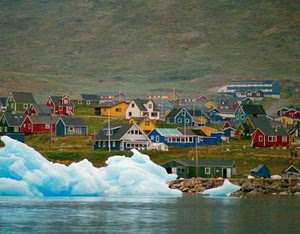 Narsaq is centrally located on a plain in the giant fjord system in Greenland. The area is a great place to sightsee, and is full of abundant wildlife including seals, salmon, trout, and whales as well as icebergs from the nearby glacier.